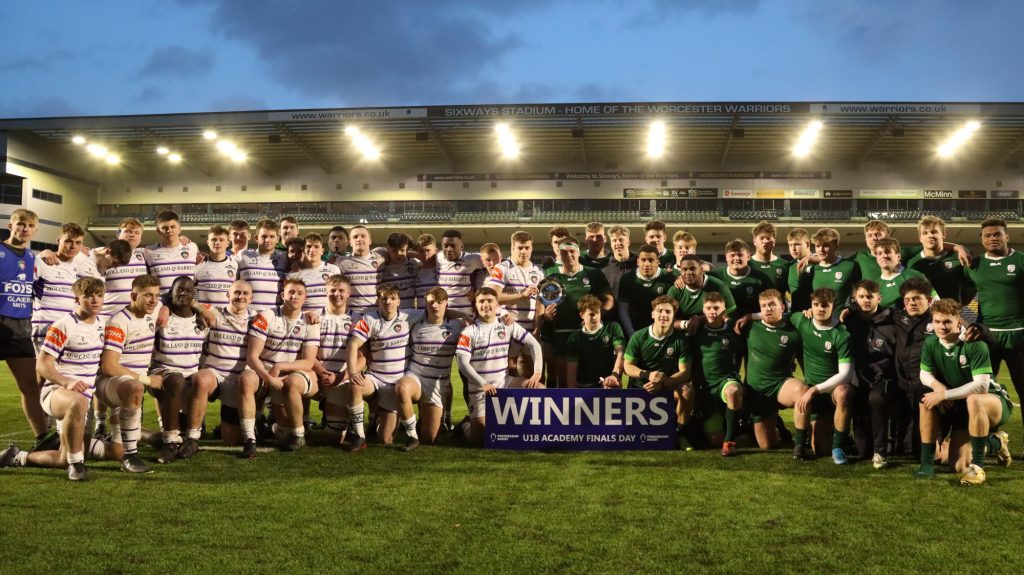 After just over two weeks off, the Premiership Rugby U18 Academy League returns for Round 3 this weekend and six exciting looking fixtures as age-grade rugby in 2022 begins.

There are seven rounds in total, with each side having one bye week and six fixtures. The fourteen sides (the 13 Premiership Rugby academies plus Yorkshire Academy) are split into two conferences of seven, divided north and south, and play each of the other sides in their conference once across the seven rounds. Then, in mid-February, once the league positions are finalised, they play their counterpart from the other conference, meaning that the top two play for the U18 Academy League title, which most recently saw London Irish and Leicester Tigers share the spoils after Tigers had won the previous two titles.

At least one of those records will go this weekend though as Sale Sharks and Northampton Saints meet out Sunday afternoon at Heywood Road.

Round 3 Fixtures and Team News:

Both sides are looking for their first victories, Tigers have lost out to Sale Sharks and Northampton Saints in their opening two games, while Newcastle Falcons lost out to Wasps in their only game so far. Newcastle keep a fairly consistent side from that team on the 23rd against Wasps, bringing in Nathan Greenwood and Tom Burton on the wings, while Ewan Venerus moves from 8 to 7 to allow Zach Oldham to move up from the bench at number 8 in Will Gibbons’ absence, Will Murray comes onto the bench. For Tigers Greshams’ George Loose moves from outside centre to full back, with Denstone College’s Oscar van Deventer earning a start at 13 after consecutive bench appearances. Matt Durbridge comes in at 9 with Oscar McCarty taking his place on the bench and it’s a similar swap for Tom Wand and Jack Hurst at loosehead. Denstone College’s George Perkins meanwhile gets a go on the bench, as do Brooksby Melton College’s Kian Carter and Malelili Satala.

Sunday’s only game sees these two unbeaten sides go head to head in the 2pm kick off at Heywood Road. Sale Sharks keep faith with much of the side that beat Worcester Warriors and Leicester Tigers, though Efan Edwards gets a go on the left wing, while Will Riley comes in at lock. On the bench Paddy Jones returns, while Tom Campbell, Kieran Kerr, and Henry Harper all get their shot from the bench too. Northampton Saints meanwhile keep an unchanged backline from the side that defeated Yorkshire Academy last tie out, while in the forward back Will Baker of Stamford gets a shot at hooker and James Bennett of Bedford comes back in at lock having previously started back in Round 1. On the bench Yuijan Zou, Aiden Kabi, Henry Pollock, and Kieran Gilmour are all given a chance.

After defeats over Yorkshire Academy and Newcastle Falcons, Wasps now host Worcester Warriors at Aylesbury RFC, a Worcester Warriors side that lost their opener to Sale Sharks ahead of a round 2 bye week. Wasps make a few changes, Kucera returns at full back after missing Round 2, while Evans moves to 12 with Sweeting promoted from the bench to start at 13 and Sinclair, who started at 13 in round 1 moving to the left wing. Up front Silman comes in at hooker, while Farmer is in at tighthead and Jones at lock, Ward meanwhile comes into the side at openside. On the bench O’Driscoll, Marsh, Blunson-Washbrook, Browning, Mason, and Randall all come in. Worcester Warriors meanwhile see Solihull’s Jack Kinder come in at full back, with Jack Condliffe promoted from the bench to start at fly half. Up front Loic Keasey of RGS Worcester starts at hooker, King’s Worcester’s Will Chater comes in at lock, while Owen Boxall of Bishop Vesey’s Grammar starts at openside. On the bench Finn Haynes and Billy Emerick both come in.

Bath and Exeter Chiefs are both looking for first victories of the season, indeed Bath are looking for a first victory for the club full stop this season. Bath make a few changes to the side that lost to Saracens last time out, Beechen Cliff’s James Redman starts at full back so Marlborough College’s Byron Lloyd-Gilmour, on home soil, moves from full back to the right wing. Sam Harris returns at inside centre after injury and shares the captaincy will with hooker Max Pearce, a fellow Millfield star. Max Jenkins, another one of the seven Millfield pupils in the side, also returns from injury, coming into the second row for the injured Will Jeanes, having started at 6 in the opening round. Downside’s Max Surry, KES Bath’s Alex Salah, and Beechen Cliff’s JJ O’Connell-Wozniak all get a go from the bench. Exeter Chiefs make sweeping changes from the side that lost out to Saracens in Round 1. Dan Hamilton Strong moves from wing to full back with Jack Statton moving from outside centre to the right wing, meanwhile Louie Drennan and George Edson are promoted from the bench to start in the centres. Nat Dart comes in to start at outside half, while Morgan Stone comes in at scrum half. Up front Jago Sheppard moves from number 8 to lock, with Ellis Kershaw coming in at number 8, Barnaby Elderkin is promoted from the bench to start at blindside. Coming in on the bench are Henry Roberts, Jake Salvi, Will Saltmarsh, and Sam James.

Gloucester host Harlequins at Kingsholm in a midday kick off on Sunday and are looking for their first victory of the campaign so far, meanwhile Quins are looking to back up their Round 2 victory over London Irish, which was their first game of the season after a week 1 bye. Gloucester’s side sees Nathan Thomson-Lee return to the side on the right wing after missing round 2, while Tom Cabot comes in at loosehead, Will Hurn starts from the bench, similarly Casey Williams goes from the bench to the 7 shirt with Jack Hall going the other way. Tom Worts is also promoted from the bench, having started in Round 1, with Fred Ma’a returning to the bench. Sam Vince and Ben Peters get a shot from the bench. Harlequins bring in Trinity’s Josh Bellamy, a former Alred Trophy winner, at full back, with schoolmate Ollie Bailey coming in on the right wing, and Wellington College’s Finn Tawse on the left. Meanwhile Ben Waghorn and Ludo Kolade swap positions in the centres and Sean Kerr of Whitgift is promoted from the bench at fly half, leaving Charlie Clare at 9 as the only member of the backline wearing the same shirt as last time out. Up front Seaford College’s Jack Wadman comes in at loosehead with jack Doorey-Palmer of Worthing College starting at hooker, while one of the biggest bits of news is that Dulwich College’s Zach Carr is fit again, he starts at number 8 with Brighton College’s Jonathan Smith moving to blindside. On the bench Claudius Wheeler, Guy Rogers, and Ben Elsey all come in.

Saracens are flying so far, with strong victories over first Exeter Chiefs and then bath, now they host a London Irish side that started their campaign brilliantly against Gloucester, and then just missed out in their local derby at Harlequins last time out. Saracens have an unchanged backline from the side that defeated Bath, and there are just a handful of changes up front too, with Berkhamsted’s Charlie Keith coming in at tighthead, and Ashford’s Anthony Mark in the second row, while Sutton Valence’s Barnaby Merrett comes in at 6. On the bench Ikhi Osebor, and Tom Barton both come in. London Irish, meanwhile, see Henley College’s George Cubitt-Makepeace return at full back, meaning a move from there to the right wing for Bishop Wand’s Matt Salisbury, while Mill Hill’s Oscar Daniel also returns, he starts at outside centre. Up front Round 1 skipper Louie Kirkham returns after missing Round 2, the Bishop Wand man starts at openside and will once again captain the side. Elsewhere in the pack Jarlaith Gleeson of City of London Freemen’s comes in at lock. Wellington College’s Thierry White and Solomon Arbuthnot-Whittaker both get an opportunity from the bench, as do Hinchley Wood’s Oran Murphy and Claire’s Court’s Will Dempster.