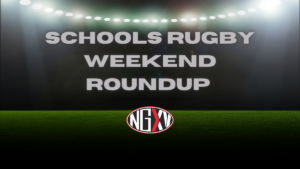 Winter finally began to descend this weekend but it appeared to have no effect on the pitch as schools the length and breadth of the land put together some magnificent performances and some outstanding games of rugby.

The NextGenXV live stream cameras took in Round 4 of The Schools Championship at Millfield, where they hosted Whitgift in an extraordinary game of rugby that you can relive below.

Elsewhere the action was equally breath-taking, from some fantastic games under the lights on Friday night to a brilliant event at Kingston Park, via close games, outstanding performances, and real displays of determination and quality.

Our Ten to Watch became Nine to Watch with the postponement of King’s Macclesfield v Stonyhurst to the New Year, nevertheless, the nine games that went ahead more than made up for any shortfall with some brilliant games of rugby and some outstanding performances.

Chief among those was in that Round 4 fixture in The Schools Championship where Millfield put in an absolutely astonishing performance against Whitgift so secure a 52-19 victory that takes them two points clear at the top of The Schools Championship table. Relentless in every facet of the game, there was little that Whitgift could do to stop the St Joseph’s Festival champions, and a horrifically unlucky series of injuries made that task all the trickie. Credit to the 3 time Schools Cup champions though, they stuck at it to the end, scoring late on as they chased the losing bonus point and the likes of Sean Kerr performing brilliantly. Ultimately though Millfield were simply on fire, the likes of Ieuan Davies, George Timmins, and George Cottrell immaculate, alongside Emanuel and Lyons in the centres, but the crowing glory was surely an intercept from loosehead prop Ioan Emanuel to finish the scoring, never has a bigger smile beamed around a rugby pitch.

Trinity are another side that are right up there at the top end of the game this year, the Schools Cup champions are in fact second, by a mere point, in the NextGenXV Schools Rugby table and are playing sensationally well. On Saturday they underlined that point away at Hurstpierpoint College, winning by a sensational 54-5 margin. Hurstpierpoint College will be featuring on the NextGenXV live stream on Thursday as they take on Seaford College. Trinity, meanwhile, are in action on Wednesday as their Schools Cup defence continues against The Judd.

Another side that have been utterly brilliant this year are Finborough, some of the top sides in the country have been bettered by the Suffolk side and on Saturday they underlined their status as giants of the county, and indeed the country now, with a stunning victory over one of the most storied sides in the area, St Joseph’s College, 64-5.

Berkhamsted bounced back from defeat last time out with a very impressive 29-19 victory over a Stamford side that has really impressed this year. The side that beat them last week, Northampton School for Boys, were in action against a Warwick side that were buoyed by a super showing against Sedbergh last time out. The spirit of that performance was alive and well as Warwick sealed an impressive 26-7 victory.

Two sides in high spirits after strong results and performances last week were Epsom College and Brighton College. The two went head to head on Saturday in a fantastic game of rugby that hung in the balance. Both sides came away with plenty to be proud of, but it was Brighton College that left with the greater smiles, winning 19-13 to seal back to back victories.

A side that have vanquished Epsom College this year en route to one of their very best seasons for a number of years are RGS Guildford and on Saturday they added another major scalp as they hosted St Paul’s and won a thrilling game of rugby 26-24. It has been a sensational year for RGS Guildford, and they are showing no signs of slowing down.

Another absolute thriller came in Yorkshire, where Woodhouse Grove claimed victory over QEGS Wakefield for the second time this season. Earlier in the year they won a Cup tie 31-24 at QEGS, on Saturday they went three points better at the same venue, winning 31-21 in a particularly strong performance.

Arguably the occasion of the weekend though was at Newcastle Falcons’ Kingston Park stadium, where RGS Newcastle and Durham went head to head in the annual Richard Metcalfe Cup. 2015 was the last time that Durham had lifted the silverware but on the field you wouldn’t have known it, the two going head to head in an incredible close content that showed off everything that is good about schools rugby. In the end though RGS Newcastle’s superb form this season shone through as they sealed a 15-8 victory, their 8th on the spin – only Sedbergh have bettered them this season.

Friday night saw some great occasions, not least in Hereford there Hereford Cathedral School and Hereford 6th form College competed for the annual Apple Cup. It was a tight game but a superb second half from Hereford Cathedral school saw them claim the silverware with a 22-15 victory.

Over at Cheltenham Tigers, The Crypt were on fire, beating Pate’s Grammar by a highly impressive 36-0 margin. New Hall were in good form on the other side of the country, winning 22-10 against Westcliff High, while Bishop’s Stortford High School had a strong 50-0 performance against St Albans 2nd XV.

On Saturday there were a number of impressive outings, not least at Sandbach RFC where once again Kirkham Grammar School were in utterly imperious form, beating Leicester Grammar 57-0 to maintain their unbeaten status that they will surely not have their sights set on carrying though to the season’s end. Along the road, Altrincham Grammar were also in strong form, beating The Grange 38-5.

In the Yorkshire the U18 Schools Vase champions, Mount St Mary’s College, were in good form again, beating Ampleforth College 21-5. Bradford Grammar School continue to impress, as they have through much of the season, winning 29-7 in Harrogate against Ashville College. Over in York, Grammar School at Leeds were the visitors to St Peter’s, and came away with the smiles after a 29-14 victory.

Time and time again of late Denstone College have given people reason to sit up and take notice, from a strong showing at the St Joseph’s Festival to that brilliant victory at Sedbergh a fortnight ago, on Saturday they added to that with a brilliant 43-0 victory over Malvern College.

Elsewhere, Bromsgrove were in a real battle at Bloxham but just emerged victorious, 17-11. A strong effort against a very good side. Nottingham High School were in an absolute thriller at KES Birmingham, winning 21-20, while at KES Stratford, RGS Worcester claimed a 17-7 victory.

Along the road Loughborough Grammar won a close one against Princethorpe College, 22-19, while Ratcliffe College won an exciting one against Wisbech Grammar 29-20 and Wellingborough were sensational against St Edmund’s College for a 59-14 victory.

Further East, Suffolk saw Framlingham College win 33-5 at Royal Hospital School, a strong effort, while in Essex Felsted won a tight one against Norwich, 11-8, while RGS Colchester won 12-5 against Coopers’ Coborn, and Brentwood were sensational against Eltham College, 54-19.

Kent saw Tonbridge win utterly brilliant form, welcoming Dulwich College for what is a real schoolboy classic, but proving ruthless on the pitch for a 44-5 victory that underlines their superb recent for. King’s Canterbury were just as impressive as they travelled to Sevenoaks for a stunning 52-5 victory, and Sutton Valence were on fire too, winning 48-8 over Cranbrook.

Things were closer elsewhere, Skinners’ winning 17-5 at Chislehurst & Sidcup, with Maidstone Grammar winning 34-16 at St Olave’s Grammar. The Judd were on the road at Langley Park and though Langley Park tested them more than many others have this year, The Judd kept their form, their momentum, and their unbeaten season on track ahead of that game against Trinity in midweek with a 39-10 victory.

Also in London, Reed’s were on song at Wimbledon College in a good game, 27-14, while Richard Hale’s incredible year continues, Merchant Taylors’ were their latest victims in a 22-0 victory away from home.

Campion had a great Saturday, beating Dartford Grammar 24-0, while Portsmouth Grammar won 24-5 at City of London Freemen’s and Aylesbury Grammar won 26-17 at Latymer Upper. Ealing Trailfinders meanwhile hosted a number of their affiliated schools, with Hayes, Duke of York’s Royal Military, Henley College, and Cardinal Newman all in action in a wonderful celebration of schools rugby.

In Surrey, meanwhile, there were a couple of contrasting but equally compelling games. At Reigate Grammar there was a high-scoring thriller, Emanuel travelling from London for a dramatic 31-29 victory. At St John’s Leatherhead things were twitchy in a different way, both sides struggling for points as St Benedict’s pushed hard but the hosts took an 8-0 victory.

Towards the South Coast, Lord Wandsworth College were in top form against Pangbourne College, winning 31-19, while Ryde won 24-10 at Embley. In Southampton, King Edward’s went down in a high scoring one against Magdalen College, the visitors winning 52-32.

The South West had some cracking contests, Seaford College heading to Canford and winning an epic 24-23, being the pick of the bunch. Look out for Seaford College on the NextGenXV live stream this Thursday. Similarly close was West Buckland’s 17-14 victory over Mount Kelly, while there were impressive victories for Exeter, 38-7 at Wellington School, and Downside, 24-7 at Wycliffe College.

In utterly stunning form on Saturday were Schools Cup quarter finalists Blundell’s, who won 68-0 at Bristol Grammar. Meanwhile Monkton Combe were on song at home to King’s Bruton, 20-5, and King’s College Taunton enjoyed a 29-14 victory over QEH.

Over in Wales there were a couple of low-scoring and close classics. Monmouth just edged out Dean Close, 6-5, while Christ College Brecon just came out on the right side against Cathedral School Llandaff, 12-7.