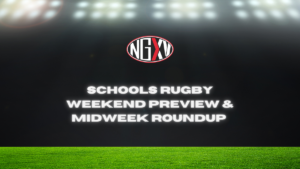 Icy conditions have already seen the bulk of the weekend’s schools rugby action called off, but a few hardy schools do have fixtures going ahead, and they promise to be great contests.

Many will be missing players due to the Premiership Rugby U18 Academy League, and you can see our preview for Round 5 by clicking the link, and therefore many are putting out development and U17 sides, but that only adds to the intrigue as they begin the building blocks for the 2023/24 season.

Friday was set to be very busy but a few high profile games have been called off. Nevertheless, the three remaining games should prove highly entertaining. Not least Samuel Whitbread Academy v St Joseph’s College, two schools so closely associated with Northampton Saints, taking each other on in what should be a fantastic game in Bedford.

On the other side of the Midlands KES Birmingham and Bromsgrove U17s go head to head, another game that should be a good one. It should be a weekend full of inspiration for the Bromsgrove U17s too, U18 scrum half Billy McDonough captains Midlands West against Newcastle Falcons in the U18 Academy League on Saturday. Completing Friday night’s game is another game in the West Midlands as Gordon’s make the trip from Surrey to Stourbridge to take on Old Swinford Hospital as both sides seek to give opportunities to players.

Saturday is thinner than originally planned, but don’t let that get in the way of what remains as there should be some brilliant rugby. Bablake & King Henry VIII welcome Kirkham Grammar School’s U17s and Shrewsbury head to Haberdashers’ Abraham Darby. Elsewhere there is a trip to Scarisbrick Hall for Birkenhead.

In London St Benedict’s and St George’s Harpenden go head to head, two sides with some utterly fantastic records through the years. Campion’s is pretty outstanding as well, they host Chislehurst & Sidcup Grammar.

Midweek lost plenty of fixtures to the big freeze as well but some key action did go ahead, not least at Chippenham RFC where the final U18 Schools Cup Quarter Final took place as Marlborough College hosted Blundell’s in an absolute cracker of a rearranged fixture. The boot of Blundell’s fly half Ben Coen was the big difference between the two as he helped steer his side to a 37-22 victory to join Finborough, Oakham, and reigning champions Trinity in the semi finals. You can watch the game again below:

On Thursday the final Schools Bowl quarter final took place, with St Mary’s College Crosby claiming their semi final spot thanks to a 36-13 victory over The Leys.

Back on Wednesday there was also crucial County Cup action, Lord Wandsworth College winning their County Plate with a 51-5 victory over Brockenhurst College, while Coopers’ Coborn progressed in their with a 50-0 victory over Hedingham. St Edward’s College Liverpool were victorious in their County Cup semi final, beating Stonyhurst in a cracking contest 15-5.