The England U16s squads for tomorrowâ€™s final day of the BMW Wellington International Festival have been announced.

The four England regions, North, Midlands, South West, and London &amp; South East, have been playing fixtures against Scotland U16s, Italy U17s, France East U16, France West U16, Wales Druids, and Wales Celts this week, with the fixtures acting as a trials process for the English regions ahead of a full blown U16 international against Scotland u16 tomorrow.

Alongside the main squad, three other squads have also been named, and England Saxons squad to face Italy U17 Academy, and England Roses and England Lions XVs to face each other at the start of the day. Wales Celts will meanwhile play a combination of the two French sides, France U16 A.

Ahead of tomorrowâ€™s fixture against Scotland U16, England U16 Head Coach Steve Shorthand spoke of the commitment the players have shown this week:

â€œIt is a huge honour to pull on a shirt with the roseÂ and the performances, and level of commitment shown by players this week, have proved how much it means to them to represent their country at this festival.â€

â€œIt is exciting to see how much talent there is in this age group and how individuals have developed as a result of this weekâ€™s experience.Â  It was a real challenge to select a final squad from over hundred playersÂ but those named have earned their places.Â  It wonâ€™t be easy taking on a very good Scotland side at the end of a demanding week but we are looking forward it and are hoping to finish a very successful tournament with a strong performance.â€

The England U16 squad will later take on Wales U16 at Neath RFC on the 27th April, on which Shorthand added:

â€œThe squad named today will form the basis of the one for Wales next week however we will be watching all games closely on Saturday to see who else puts their hand up.â€Â 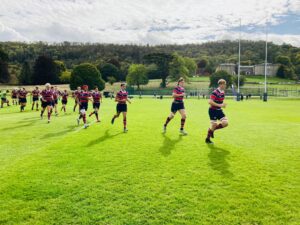