The 2022/23 Premiership Rugby U18 Academy League kicks off this weekend in a departure from the historical schedule for the tournament.

In previous years the Academy League would kick off following the conclusion of the main school season, with game running through the Christmas holidays and into the new year with the finals in mid-February (on occasion a game would be held during the October half term).

This year however, in a move that will allow young players a proper rest over the Christmas period, the first two rounds of the competition take place in August, with Round 1 this weekend and Round 2 next weekend, before a complete rest until 2023 when Round 3 takes place on the 6th, 7th, and 8th January.

Round 4, 5, 6, and 7 take place through the rest of January and early February, with the Finals scheduled for either the 18th or 19th February.

As ever, the league is split into two conferences of 7 (the thirteen Gallagher Premiership clubs plus the Yorkshire Academy), split North/South. The finals will see sides from the Northern Conference taking on their counterpart in the Southern Conference. 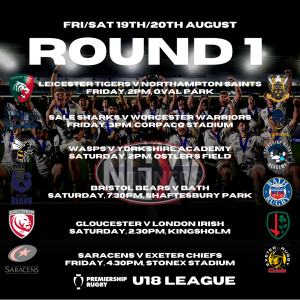 Bristol Bears won the 2021/22 title after topping a thrilling Southern Conference to set up a final against Northampton Saints. The Champions kick off their campaign on Saturday night at Shaftesbury Park against old rivals Bath, who finished 7th last year after a fourth placed finish in the Southern Conference before beating Newcastle Falcons in their play off.

Runners up Northampton Saints also begin their campaign with a big derby, and indeed they kick off the campaign as a whole with the first kick off of the season on Friday at 2pm. They head to Oval Park to take on Leicester Tigers, whom they just pipped to the top of the Northern Conference last season. Tigers in the end finished third with a victory over Harlequins in their play off.

Quins have a bye week to begin, so too Newcastle Falcons, with there being an odd number of sides in each conference there is a bye for one side in each conference every round. However the two will actually meet each other in a friendly on Thursday at Loughborough University and will also play an U17 game.

Joining Tigers and Saints with a Friday kick off at Sale Sharks and Worcester Warriors, who go head to head in the Northern Conference at CropAcq Stadium, kicking off at 3pm. Then at 4.30pm in the Southern Conference Saracens and Exeter Chiefs meet at the StoneX Stadium.

On Saturday Wasps host Yorkshire Academy in the Northern Conference at Ostler’s Field in a 2pm kick off, while in the Southern Conference Gloucester host London Irish at 2.30pm in what should be a special occasion, in front of hopefully a strong crowd at Kingsholm.

It promises to be a fantastic opening round, teams will be shorn of a few players on England U18 duty, but that should only serve to give more players to wear the shirt in an Academy League season like none before it. 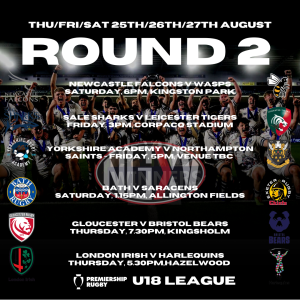