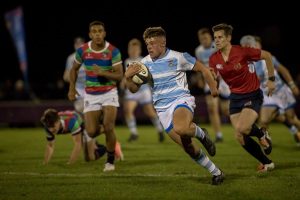 Thursday sees Clifton College and Kirkham Grammar School go head to head at Clifton RFC in what could well be one of the games of the season.

Certainly Clifton College have already proven themselves to be one of the very best, while Kirkham Grammar School are expected to – their start to the season has been hampered by both of their opening two games being cancelled.

NextGenXV will be live streaming every second of this clash of giants as we head to Clifton RFC on Thursday evening for the 7.30pm kick off, which you will be able to watch on our YouTube channel, on TikTok, and in the embedded video below.

Off the field the game is going to be incredibly special too. It is the annual Ryan Bresnahan memorial game. Ryan was a former pupil of Clifton College who died suddenly on 31st march 2010 of Meningitis B. It was a sudden and tragic death. Born from it was ‘a Life for a Cure’ a charity raising funds for search of the ultimate vaccine for Meningitis B and so far over half a million pounds has been raised.

Thursday’s evening kick off will be in his memory, and the winners will lift The Ryan Bresnahan Cup. It will follow a day of festivities, with a Prep School fixture kicking off the evening’s entertainment, following on from U14, U15, and U16 games. With a raffle and BB!, funds all go to A Life for a Cure. You can learn more here: Ryan Bresnahan, A Life for A Cure.

So it will be a special occasion off the field and, without doubt, it has the potential to be an epic on the field. Pre-season expectation was that these were going to be two of the best around. As mentioned, Clifton College have already gone some way to demonstrating that with their outstanding performance against Millfield in the opening game of the season at Sedbergh (which you can watch below), followed by a quite outstanding  display against Old Swinford Hospital on Saturday, a side remember that had put themselves on the map in week one with the victory at Monmouth.

For Kirkham it has been a frustrating start to the season, but only in so much as that the reigning Sedbergh Super 10s champions have not actually been able to play a competitive game after fixtures against Wirral Grammar and Lancaster RGS were cancelled following the death of The Queen.

What they can look back on is the knowledge of the promise they showed last year and through pre-season, a pre-season that saw them looking very strong indeed, including in defeating ACE side Mysercough College in absolutely dominant fashion.

It has all the making of a classic, and in terms of the final ranking for the season it could be absolutely key. Both sides are packed with outstanding young players of exceptional quality, energy, and enthusiasm. Both can play fast and loose if they want, but they are more than happy to play big and play hard when necessary – it was a key aspect to Kirkham’s Sedbergh 10s triumph, and it was a major factor in Clifton’s defeat of Millfield at the same venue last week.

We are in for an absolute treat – be sure to join us!