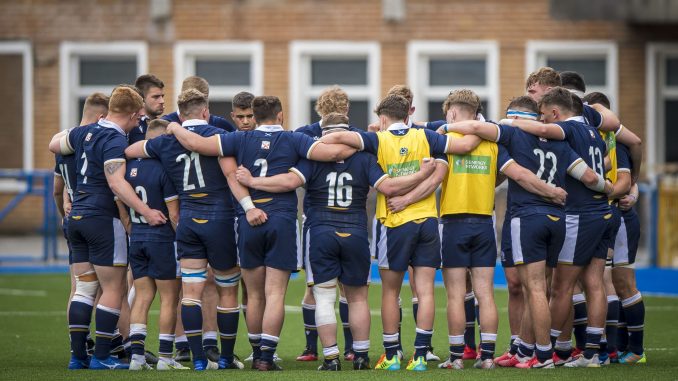 Scotland have named their U20 squad for the forthcoming Six Nations campaign, which begins a week on Friday against England.

Head Coach Kenny Murray has named a 30-man squad, which will be led by former Sedbergh School star Rhys Tait, now plying his trade with Glasgow Warriors in the United Rugby Championship and Boroughmuir Bears in the FOSROC Super6, where he produced some superb performances, including a man of the match display against Watsonians.

Tait played in all five games in the 2021 U20 Six Nations and is one of 14 players that were a part of that competition, which was played entirely in Cardiff in the summer due to the pandemic.

He is also one of ten players training full time with either Glasgow Warriors or Edinburgh Rugby, the others being Mikey Jones, Patrick Harrison, Ben Evans, Jed Gelderbloom (all Edinburgh), Max Williamson, Euan Cunningham, Mike Gray, Ross McKnight, and Christian Townsend (all Glasgow).

BUCS Super Rugby in England also provides much of the talent in the squad, Tom Bantalava and Jake Spurway of Durham University, Duncan Hood of Bath University, and Exeter University’s Ollie Leatherbarrow in the forwards, and a third Durham University representative, Jonty Cope, in the backs, alongside Newcastle University pair Ollie Melville and Murray Redpath who were, like Tait, Sedbergh School stars.

Elsewhere in the squad there are two Glasgow Hawks, Ali Ogers and Tim Brown, as well as two GHA players in Andy Stirrat and Gregor Hiddleston, as well as Boroughmuir’s Duncan Munn and Stirling’s Ben Salmon.

One of the players to really keep an eye on among the 30 though is young Strathallan School prop Callum Norrie, the youngest member of the squad and a highly exciting prospect.

Commenting on the squad selection, Scotland U20 Head Coach Kenny Murray said: “Having just stepped into this role I have been impressed by the players commitment intensity and skill-set during our camp this week.”

“I watched a lot of the FOSROC Super6 last year and have had the chance to work with some of these players in the Glasgow Warriors setting already, so I know what they are capable of. The squad had a difficult time down in Cardiff last year, although it was challenging for them it does mean that 14 players now have the experience and knowledge of playing international rugby and they know how to better prepare for what is to come this year.”