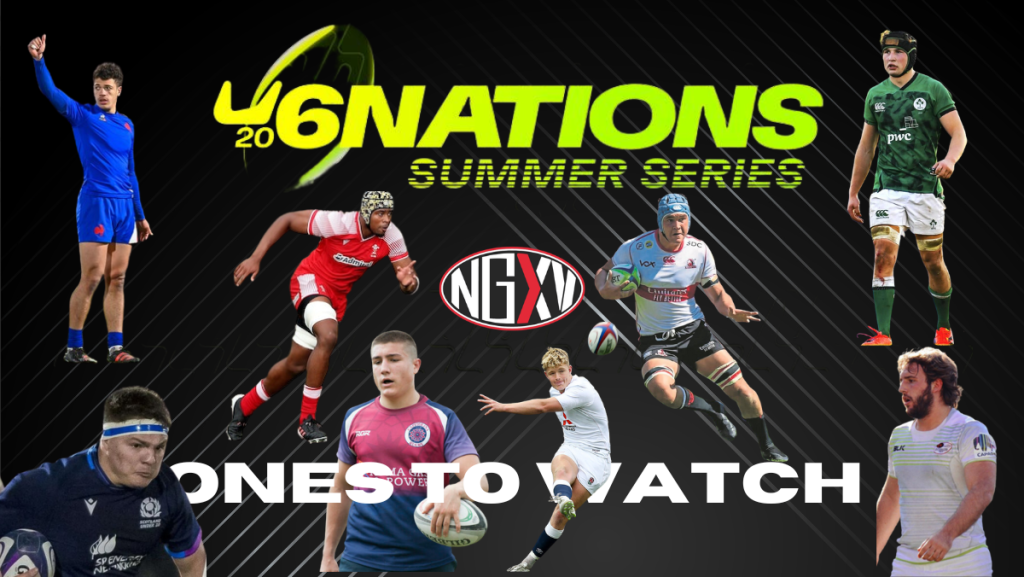 As we build up to Friday’s kick off in the U20 Six Nations Summer Series, we take a look at a player in each squad that we think you should be keeping an eye on through the forthcoming four rounds of games.

Six of the eight players were chosen in our PACS U20 XV to watch earlier this year, while one other player was named in the wider PACS 100, one player has emerged from outside of either selection!

A precocious talent formerly of Warwick School, Smith’s performances of late have led to some (only partly with tongue in cheek) to suggest that Marcus might soon not be the best Smith wearing 10 in the Gallagher Premiership. Fin might not be there yet, but he is playing at a seriously high level and with Gregor Townsend having been in touch, this Summer Series could be an opportunity to be in the shop window for more than just the one national side.

You know his father and you know his brother, but Théo Ntamack is cut from a different cloth; an all action number 8 that has bags of experience at this level and could have a huge impact on this tournament. Look out for him in tandem with fellow back rower Killian Tixeront, another hugely promising young French forward. Ntamack does have some crossover skills with his family, a turn of pace and strong handling game too, making him the archetypal modern number 8.

Georgia and front rowers, it’s a special combination and with this group it’s no less so. Four of their front row for this series are plying their trade in France, but while the majority are Espoires, Gvelesiani is in the senior squad at Provence and making an impact at the fast-rising and ambitious club. Look for a similar impact through this tournament.

Crothers captained Ireland to a Grand Slam in the U20 Six Nations, and he will be skippering the side again in this summer series. The test is going to be a big one for Crothers’ charges, with France, England, and South Africa in their pool, but with Crothers at the helm they have a strong chance. A genuinely abrasive and old fashioned flanker, Crothers is also an all-court player and a top lineout operator. Not unlike Peter O’Mahony.

Italy seem to have a bit of a habit at the moment of producing superb young props, and Luca Rizzoli looks like he could well be another off the production line. The Capitolina man is supremely highly rated and could yet see a move outside of Italy should the tournament go well, and having picked up 3 wins in the U20 Six Nations, there is no reason why they should not feel confident of repeating that trick again this summer.

Harrison was our pick at hooker in the PACS XV to Watch, and it’s little wonder why. Stellar performances from Scotland U20 have been evidence of his quality, but so too the fact that he has seen proper game time for Edinburgh despite being an U20 – a very rare thing in the front row. For Scotland this tournament is huge, too, as they were relegated to the World Rugby U20 Trophy at the last World Rugby U20 Championships, this high level exposure will be important as they plot a route back to the top table when the Championships resume in 2023.

The monumentally sized Venter has gone from strength to strength since making our XV to Watch, performing for the Sigma Lions on a number of occasions at lock and back row in the United Rugby Championship. He is a fantastic combination of size and athleticism, with great pace and a work rate to defy the odds. This South African squad has plenty of players to shout about, not least Sacha Mngomezulu, but do not sleep on Venter, who could have one of the biggest impacts of all.

So to Wales and perhaps the least surprising of all of these players to watch, Christ Tshiunza, the man who has already been capped by Wales and who was named our Number One U20 Prospect for 2022. Tshiunza may already be capped, but be under no illusions, this is a tournament that he is going to want to make his mark on ahead of what looks likely to be a season with Exeter Chiefs where he will be expected to start to become a regular. Capable at either lock or on the blindside, Tshiunza is a man mountain and a modern day forward if ever there was one. You simply won’t be able to miss him.